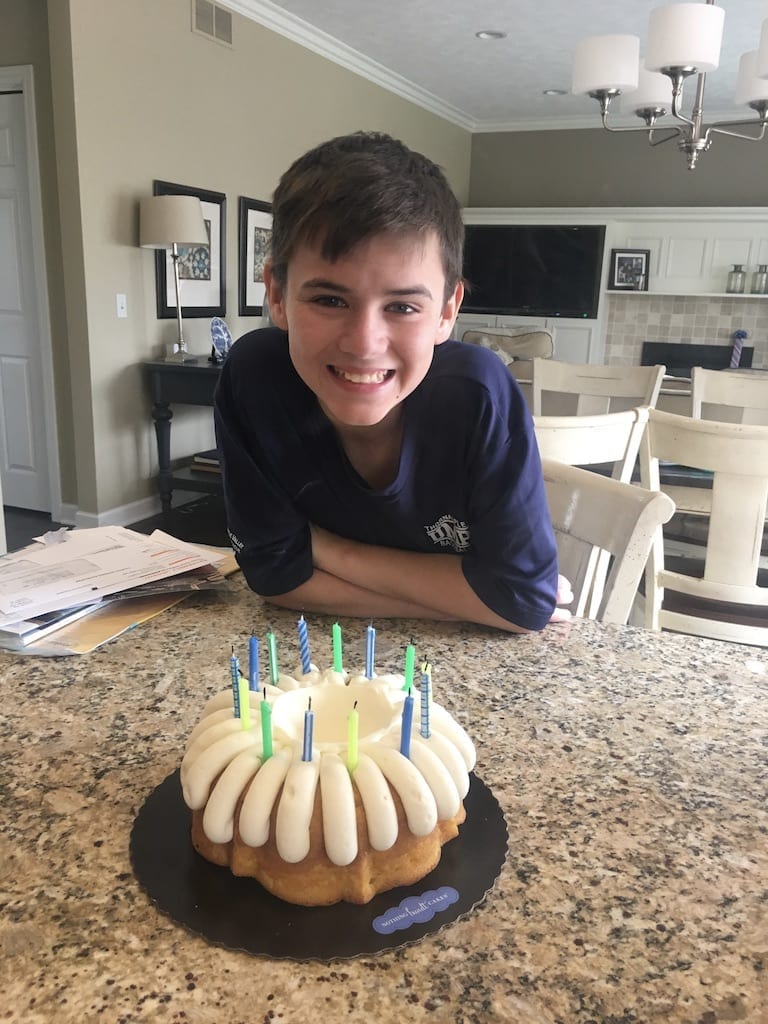 Today Andy should be turning 16 instead of being forever 14. I sit here writing with tears running down my face thinking about what should be happening today if I had only done just one tiny thing differently on August 15, 2018. If only we had decided not to go to the baseball game that night. If only I had not let Andy go upstairs when he got home from soccer practice and we had gotten straight in the car. If only we hadn’t stopped at my office to pick up that extra ticket on the way. If only, if only, if only…

If just one of those things had changed or any one of a hundred others, today would be very different indeed. Today, I would instead be like other parents I see on social media, concerned about trying to make Andy’s birthday special during a stay-at-home order. I would be trying to convince him that it was really no big deal that he would not be able to go get his driver’s license today. I would be telling him that he could do anything he wanted to do today with the family (as long as it took place at home). I would make him anything he wanted to eat for dinner or even get take out from any restaurant. I would even make sure to get him a bundt cake (because as Andy said the day before he died, ‘That’s what Larsons do on their birthdays! We eat bundt cake!”).

What I wouldn’t give to have those things happening today. Instead, I sit and write and cry. I long for him. I ache for him. I feel completely lost as to what to do today. We have talked about it as a family for at least a week now. We set the day aside and no one is working, feeling like we should be doing something, like we should honor him or celebrate him in some way, but we aren’t sure how. I sense the tension in every person in the family. Kathryn has slept with Andy’s teddy bear for the past two nights. We don’t know what to say or do to help each other so we do nothing. We sit quietly, not wanting to make the day worse for anyone else.

Last year, the first birthday without him, fell on Easter Sunday. In some ways, that was horrible, but in others, it was easier because we had something planned. We went to church, went to Michele’s house for Easter dinner with her extended family and went out golfing later in the afternoon because it was one of Andy’s favorite things to do. Today, there can be no church, no time with friends and no golf. I know I will go to the cemetery on this cold day. I wish I could put a hanging plant on the shepherd’s hook by his grave or tie some balloons there, but I don’t think there is any place open where I could buy them today.

Although I’m not sure what will happen for the rest of this day, I know that it will end and tomorrow will come. We will return to work and the kids will do their online homework. Hopefully, soon I will even be able to hang a plant on that shepherds hook. Today, I need to give myself permission to cry even if it causes my family to start crying as well. We are all hurting today; it is probably better to share the pain with each other. Perhaps we will try to figure out what Andy would want us to do with our day or even what to eat for dinner. Perhaps I should even go get that lemon bundt cake.

*** As an aside, I appreciate the text messages that I have received so far. I had such a fear that no one would remember and thankfully, that has not been the case.  I was thinking also about a way others could honor Andy today as well. Many family and friends would have given Andy a card or birthday present today. I think it would be awesome if people could donate to the Grand Rapids Choir of Men and Boys to honor Andy today, not to the Andrew Larson Memorial Fund, but to their general fund. Every year, the choir performs four concert series. This year, along with the Andrew Larson Memorial Concert being cancelled, both the Lenten concerts and the spring concerts had to be cancelled as well.

The choir is primarily funded through donations from the general public so losing these concerts is a big hit. Additionally, the choir charges tuition for the boys (although scholarships are available for those with financial hardship). This next year, because of the tremendous economic strain the pandemic has put on the community, the board has decided not to charge tuition to any boy! I am so proud to have my sons be a part of such an organization. They are trusting that God will be able to provide over the coming year, and I would love if Andy’s birthday could result in donations to the choir today. It would be so awesome for people to give a $16 donation for his 16th birthday. Thank you all so much.