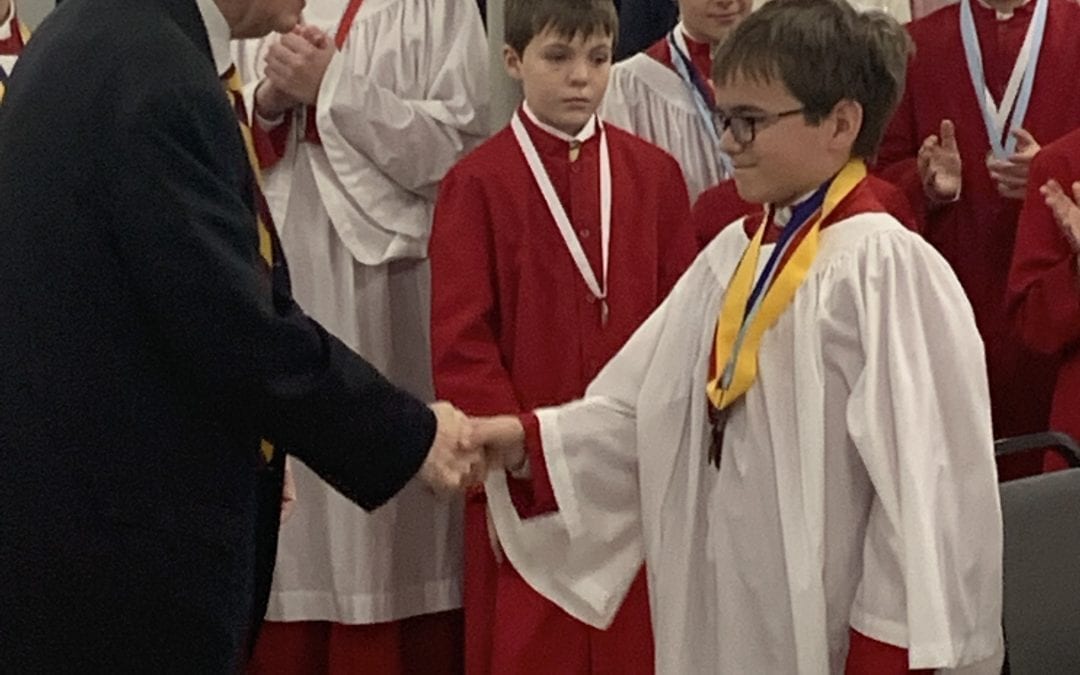 Last night marked the beginning of the 30th Season for the Grand Rapids Choir of Men and Boys and the 6th season for the Larson family. Last year, every concert was filled with overwhlming emotion for me. I would cry throughout the entire concert, occasionally even having to step out. Initially, the choir would save us spots in the front as the entire choir seson was dedicated to Andy, but I found that I could be a bit of a distraction to both Peter and the other boys who knew and loved Andy. I found myself trying to hide at least a few rows back so when emotions overwhelmed me, I could hide behind someone else.

I did not know what would be in store for me this year. Peter was named a head chorister this year and given his head chorister medal just as Andy had received two years ago. I remembered back to that day when Andy was named head chorister. It had been Peter who was flying high with excitement that evening, the kind of excitement that Andy normally displayed. He told me the second that he saw me that Andy had been named head chorister. Hours later, when it was time for bed, it was Peter who said he was too excited and did not think that he would be able to sleep that night. I had never seen Peter so proud of his big brother. Andy, on the other hand was trying to play it cool, but I knew that he was inwardly thrilled as well.

The concert last night at the Cathedral of St. Andrew did hold many of the same emotions that I felt last year. The most emotional times for me occurred when I closed my eyes. With my eyes closed, I could picture Andy standing right beside his little brother, singing his heart out. It had been amazing to watch Andy sing because his face was always so expressive, showing so much emotion. Many people over the years, telling me that Andy was their favorite chorister to watch because of what he showed in his facial expression. Even after he died, I had strangers write to me telling me how they would miss watching Andy sing.

Not only was I able to imagine watching him sing, when I closed my eyes, I feel like I can hear his voice as well. In general, you cannot usually pick out a single boy’s voice, but in my mind, I can hear Andy specifically. As painful as these concerts continue to be for me, I do feel closer to Andy there than I do anywhere else. He had his happiest moments in those concerts. I realize that I probably watched him more closely at those concerts than anywhere else. For likely over fifty concerts, I would watch, his face in the first two years and then his and Peter’s over the second two years. What other time could I stare into my boys’ faces for 90 minutes at a time? Perhaps that is what I can see and hear him so clearly there.

I invite anyone in the Grand Rapids area to come to one of the remaining two concerts this weekend. There you can see Peter and the other boys sing. Tonight, the concert is at 7pm again at St. Andrew’s and tomorrow, Sunday, October 25th, it is at Mayflower Congregational church at 5pm. Hopefully, down the road, I will be able to attach audio recordings of at least some of the concert in this or another post so others may enjoy it as well. If you see me there tonight, know that you may see tears, but that I will be truly feeling Andy’s presence with me.